Opening Day-Back in the Day

Every opening day for Major League Baseball brings excitement and hope for a great season.  If you had a snowed-out game you knew it would be rescheduled soon. That is why this entire coronavirus pandemic is still hard for me to comprehend. It's like we are watching a crazy movie but we are living it. I am praying for everyone and hope you all stay healthy.

If you are a baseball fan or photo buff, I hope you can forget a little bit of what is happening now and enjoy this old Story Behind the Shot from back in the day.

If you live in Cleveland or any place where it is cold, the opening day brings you to hope that warm weather is here – and summer is just around the corner.  Opening day also brings back memories of one of my favorite baseball feature photos.  It was April 1996, and I was assigned by Sports Illustrated to cover the Cleveland Indians’ opening day game with the New York Yankees.  Cleveland had a huge snowfall overnight, and the game was canceled first thing in the morning.  I called Maureen "Moe" Cavanagh, the baseball photo editor and one of the best in the business, to check-in and let her know the game was canceled.  Moe knew of the cancellation but suggested I go to the park anyway to see if anything was happening. She said I always come up with something.  Although we had a lot of snow the day before, the weather turned warm. So I grabbed my gear and drove down to Jacobs Field. I walked into the park with my Nikon FM2 with a 180mm lens and Nikon F3 and a 300mm f/2.8 lens attached – all loaded with film and ready to shoot.  I also carried wide-angle lenses in my camera bag just in case.

As I headed onto the field, I was pleasantly surprised to find a couple of the New York Yankees players dressed in their uniforms playing in the snow. I grabbed a couple of photos of them throwing snowballs and then I noticed Yankees pitcher Kenny Rogers rolling a giant snowball. The light background was not conducive for capturing the detail of the scene so I quickly changed my position so I would have a dark background. This created a nice backdrop with better contrast so the player and snow would pop out of the background better. It was fun watching these guys play in the snow like little kids. They did not stay out very long and headed back into the locker room after one of the coaches told them to come inside. I was very glad that I had my gear ready to go when I walk into the park because I only had about ten minutes to shoot at the most. Very pleased with what I shot and the fact that I was the only one there with a camera, I headed back to the car.

This being a Monday in 1996, the old days of film with manual focus cameras and lenses. Along with it being Sports Illustrated deadline day, I immediately went to the airport to ship the film to New York. No digital and email back then. I called Moe to tell her that her instincts were correct and the film was on its way.  Moe loved the pictures as well as the editors and my photo of Rogers ran on the contents page of Sports Illustrated with the caption...

Yankee Kenny Rogers uses his $20 million arm to have a ball when New York's season opener at Cleveland was snowed out on Monday.   Photograph by David Liam Kyle 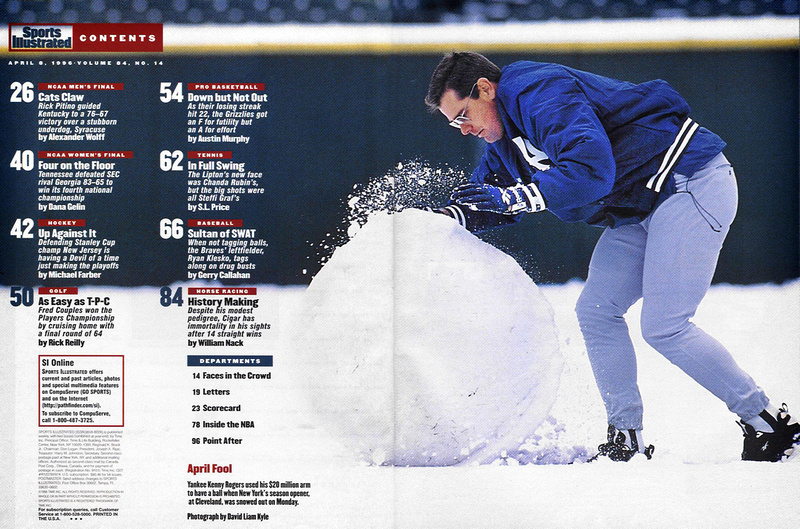