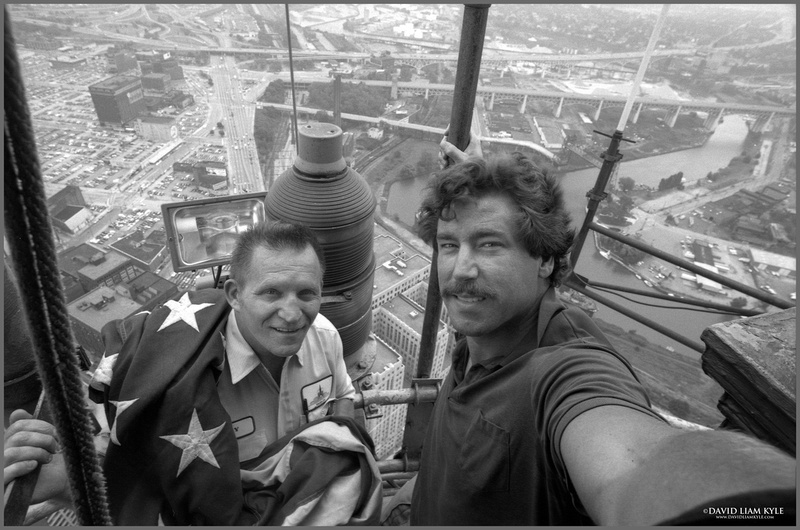 Top of Terminal TowerOne of my favorite Long Arm Shots was taken while on assignment featuring the gentleman who replaces the American flag on top of the Terminal Tower. His first name was Ray and I'm sorry I can't recall his last name. At that time it was the highest building in Cleveland and I was at the highest point humanly possible... unless you are Spiderman.

Many people have staked claim to the fact that they have invented the selfie. (I consider a selfie a photo taken of yourself while you hold the camera) By the way, I would never call it a "selfie" because it was never about me. It was about where I was or who I was with. I call it my "Long Arm Shot."  When I first started shooting this in the early eighties, I used a NIKON F2 35mm film camera with a 20mm lens.  You needed long arms and big hands to create this photo with the older cameras. Since I am 6'9",  I had no problem.  I am NOT claiming to have invented the selfie, but I do know that I'm glad I took a few "Long Arm Shots" to document some great memories.

THE GENESIS OF THE LONG ARM SHOT
My first Long Arm Shot was taken in 1981 while covering the Strongsville Air Show.  Tom Krukemeyer,
the show organizer asked me if I was interested in going up in an airplane to photograph the historic bi-plane from the air.  I climbed into the passenger seat of one of their small planes, and we started toward the runway.  Since both steering wheels move forward, backward, and side to side, the pilot was concerned that my legs were too long to allow room for the controls to move freely.  We started heading down the runway, and I could sense the pilot was getting nervous. As we accelerated for takeoff, getting even more nervous, the pilot energetically expressed his concern again that he might have problems with my legs in the way.  "Then don't do anything stupid," I quickly responded.  He was very relieved as he slowed down and took us back to the hangar.  Once we returned, Tom Krukmeyer said, "I have a plane that I'm sure you'll fit into."  The AT6 Fighter Trainer plane was on display that day from the Historical Society.  As Tom talked to the pilot, a crew of ten volunteers was shining the plane.  It looked impressive.  Tom introduces me to the pilot, and as we shake hands, he says, "If you're ready to go...hop in."  He didn't have to tell me twice.

While getting into the cockpit, I thought that my father would never believe I was flying in an AT6.
My Dad was a Marine combat veteran who received three purple hearts during WWII. He always loved these old fighter planes and even mentioned that they saved him in combat more than once.  We start rolling down the runway.  I tightened my seat belt.  Listening to the pilot through headphones, I can hear and talk to him sitting directly in front of me.  "Are you ready?" comes through my headset...  As soon as I say yes, I hear, "Here we go." The powerful engine roars to life, and we take off in seconds.  I've never felt so safe in an airplane, feeling the power of that engine and knowing I have a veteran pilot in control.  That AT6 was so powerful that it could have taken off in my driveway.  As we fly around, I see several golf courses in the sky. I knew my Dad was playing golf somewhere today, as he did every weekend.  I thought," Man, if Dad could see me now, he wouldn't believe it."  I needed some evidence, so I shot photos of the pilot with a 20mm lens on my Nikon camera.  I then turned the camera around and took a couple of shots of myself while we were in the air.  I also took photos of the bi-plane as we circled above.  After we landed, I handed my camera to one of the crew members and asked that they take my picture as I exited the cockpit.

This event occurred during the early eighties, the old days before cell phones.  I had to wait until I got home that evening to call my Dad. I say hello, but before I can say anything more, he says to me, "Dave...you will not believe what I saw today when I was playing golf...two old planes...looked like they were dogfighting".  So I said, "Dad, I was in one of those!" But he didn't say anything.  I was disappointed that he didn't believe me.  Although I can understand why I was one of eight children, I'm sure he's heard some whopper stories from my older brothers over the years. I'm also notorious for playing practical jokes. So I didn't even try to convince him, just told him I'd be over Monday with the photos.

After finishing work at the newspaper, I print up several black and white images from my flight.  Photos of the AT6 Fighter Trainer plane, wide angles of the pilot in flight, the biplane in flight, my Long Arm Shot in the Cockpit, and myself getting out of the plane.  I walked into my folk's house and saw my Dad sitting at the kitchen table with a cup of coffee.  I hand him a bunch of 8x10s. He looks at the pictures and gets a big grin on his face. immediately he picks up the phone and starts dialing.  "Hey Joe, you know those old planes flying around Saturday while we were golfing?  My boy Dave was in one of them!  Yea, really, he even has photos!"

Not sure where those original photos went, as my Dad passed away a few years later in 1984 from cancer.  I will never forget his face as he viewed my first "Long Arm Shot."

I've taken hundreds of thousands of photos over my photojournalism career, and I've never thought about organizing a "Long Arm Shot" collection. Many Long Arm Shot negatives are filed away with other assignments, and I gave most of the prints away to the people in the photo.  I did, however, save a few of my favorites that you might enjoy.

Over thirty-five years ago, I took the photos below—a lifetime for many.  I hate to say my new friends can't even recognize me. But instead, they all say..." is that you?"

Note: I took all Long Arm Shot photos with my left hand because I could hold the camera more securely and press the shutter release easily with my thumb. Since the camera was utterly manual, I would set the exposure ahead of time.  While holding my Nikon FM2 in my right hand, I would extend my left arm in front of me and focus on my hand. Then switch the camera to my left hand, raise my arm, aim and click the shutter.  Easy!  (mouse over photo for caption). 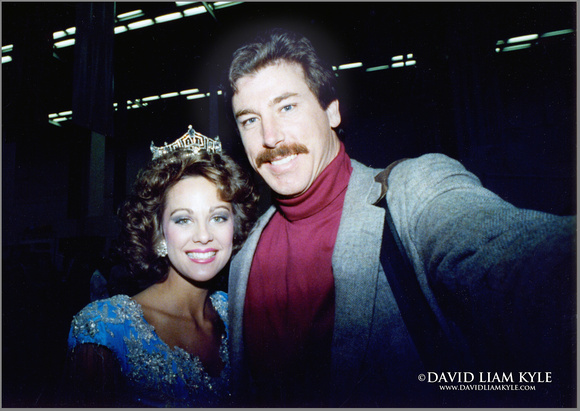 1988 Miss America Kaye Lani RafkoOne of my favorite Long Arm Shots was with Kaye Lani Rae Rafko, Miss America 1988, while on assignment at the Cleveland Auto Show. We had a chance to chat while she was waiting to give a speech and it was easy to tell why she had won Miss America. 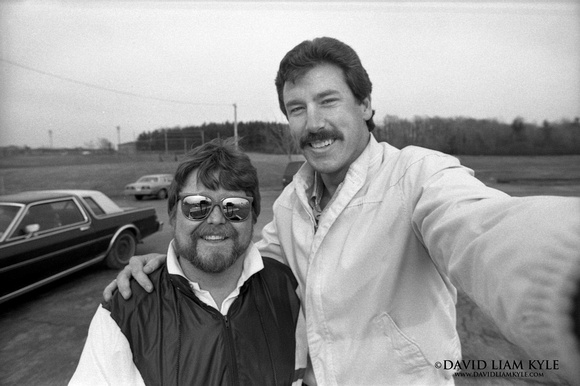 Doug HansonLong Arm Shot with one of my old friends from my Cleveland State days. If you look close you can see my hand and camera reflected inside Doug's mirror sun glasses.

ReflectionIf you look close you can actually see my arm holding the Nikon FM2 35mm film camera with straps hanging in the reflection of Doug Hanson's sunglasses. 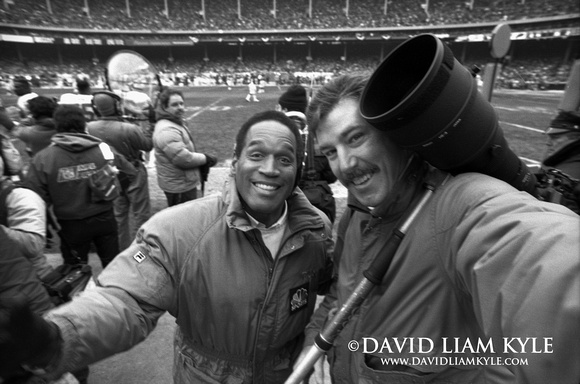 "The Juice"Grabbed this shot of O.J. Simpson when he was working for NBC on the sideline of the Browns-Bills NFL playoff game. Simpson was at the height of his popularity and laughed when he realized I was taking the picture. 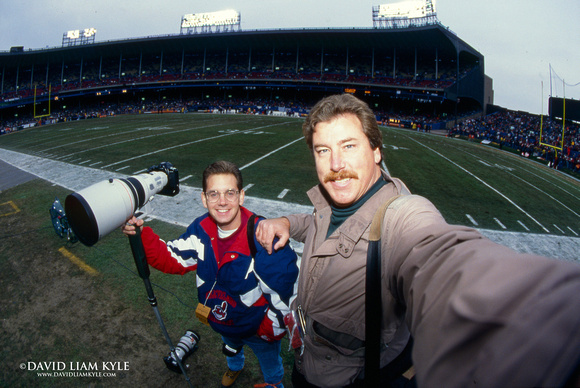 Last Game at StadiumLong Arm Shot after the last Browns game ever played at Cleveland Municipal Stadium. Photographed game for Sports Illustated and my nephew Mike assisted. Never forget how eerie it was afterwards knowing it was over and hearing all the hammering as fans were removing their stadium seats to take home as souvenirs. SI ran a photo I took of Jim Brown on sideline with tear rolling from his eye. 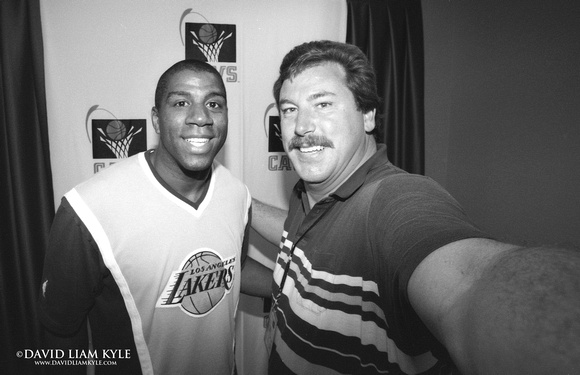 "Magic"Magic Johnson was one of the friendliest pro athletes I ever met. Think I have him by an inch. 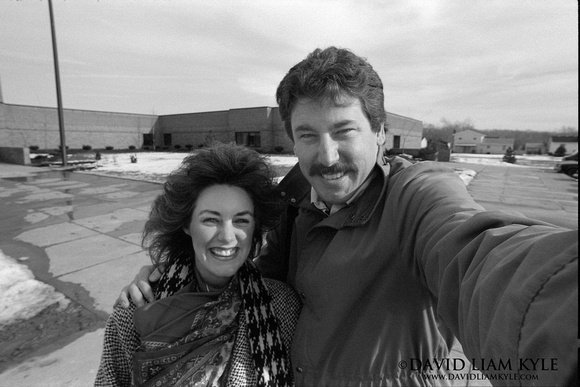 Robin SwobodaPhotographed Robin Swoboda speaking at a elementary school in Brunswick. Even though we were under extremely windy conditions Robin still took time for the photo. Wind didn't do justice to her hair. 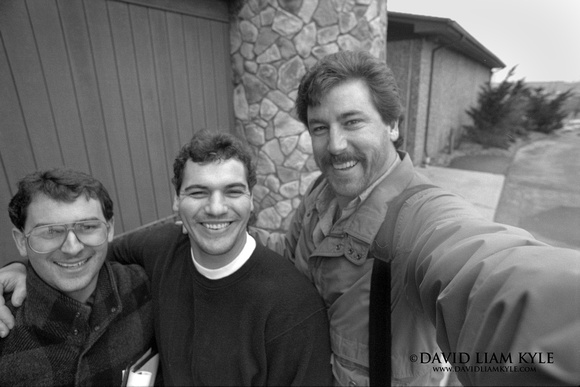 Two Super Joe'sLeft is Joe Sitt along with Indians legend Super Joe Charboneau. Joe Stitt passed away from cancer years ago and was a great reporter and person. Joe just finished interviewing Super Joe for a feature story when I grabbed this shot. 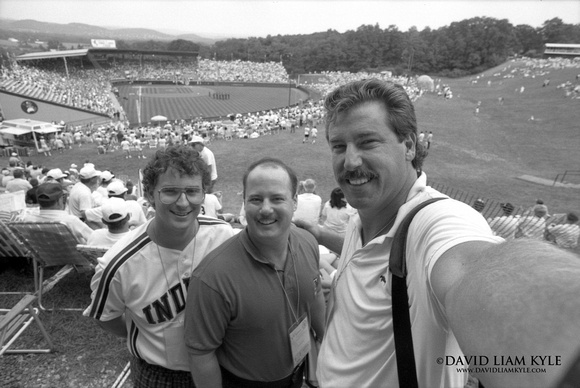 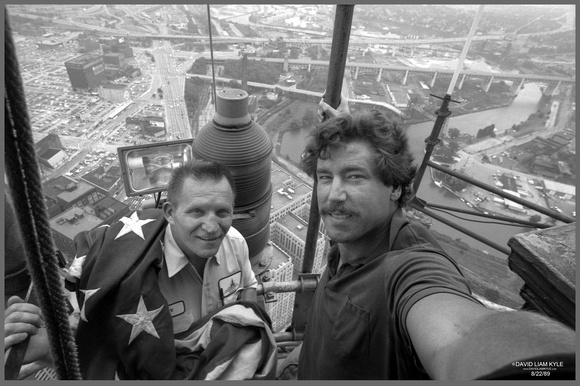 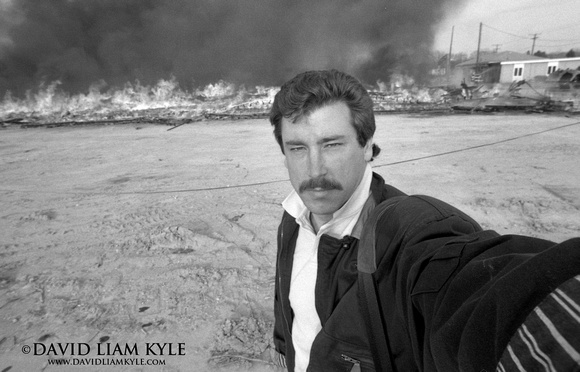 Spot News FirePhotographed spot news building fire when the fireman decided to let it burn out. The fireman and trucks were just out of camera view as I took this Long Arm Shot many years ago. The fire without the fireman makes for an interesting photo.

In the CatwalksGary Allen, one of the top photojournalist ever in North Carolina and I share a laugh as I take a Long Arm Shot in the catwalks during the 1989 Summer Olympic Festival. 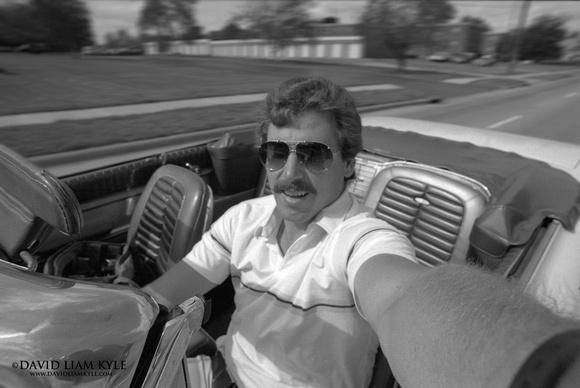 Cruising in My GalaxieAlmost lost my camera on this one. Driving in my 1964 Ford Galaxie 500XL convertible holding a Nikon FM2 camera with a 20mm lens. Still have the car and my hair although it is gray. Have owned my Galaxie over thirty years and it looks the same and hasn't age a bit. Wish I can say the same about me.